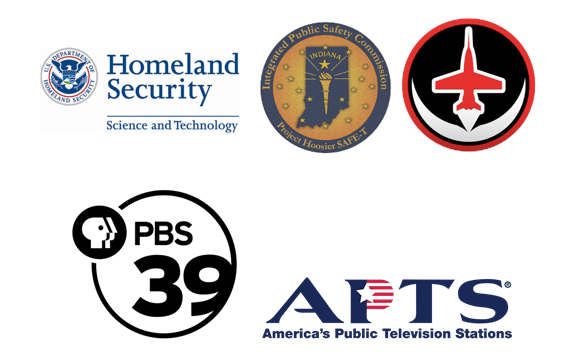 The simulated school shooting incident was conducted at the Adams Central Community Schools. School administrators and teachers participated in today’s demonstration, but students were not on campus.

Today this data stream was used to share critical information from the simulated incident with first responders and public safety officials from multiple agencies. This information included live video from multiple cameras, school blueprints and other information that would be essential for responding to and resolving an actual school shooting threat.

PBS 39, the public television station serving Adams County and headquartered in Fort Wayne, provided the datacasting equipment and expertise. America’s Public Television Stations, the national organization representing more than 300 stations in all 50 States, is a strategic partner with the Department of Homeland Security in promoting the public safety benefits of datacasting nationwide.

Datacasting’s “one-to-many” communications architecture makes it possible to send huge streams of information quickly to an unlimited number of law enforcement officers and first responders without risk of the congestion and system failure often associated with cellular networks during emergencies.

“The support, participation, and significant contributions of numerous agencies and personnel involved in today’s exercise made it a great success,” said DHS S&T Program Manager Cuong Luu. “The willingness and dedication of Indiana and Adams County first responders, as well as DHS partners and performers, has facilitated the development of innovative technology that will help the nation's first responders become better protected, connected, and fully aware to maintain the safety of American lives and communities. None of what we do would be possible without working together closely with first responders, academia, research and development, and the innovation community.”

“I’m convinced that state and local first responders can truly benefit from this public television station/public safety partnership,” said David W. Vice, Executive Director, Integrated Public Safety Commission. “The Indiana Department of Homeland Security and the Integrated Public Safety Commission have been working behind the scene for months on this pilot project, and we’re gratified to see it in action today.”

“Adams Central Community Schools are extremely grateful for the opportunity to host this datacasting/active shooter exercise,” said Chad Smekens, Middle School Principal, Adams Central Middle School. “We believe the training benefits to local safety personnel, and the datacasting technology now in place, will help us protect the lives of students and staff at Adams Central long into the future. The Adams Central community is honored to work with the professionals at PBS39, the Department of Homeland Security, Indiana Dept. of Homeland Security, John Hopkins University, SpectraRep, and the many local and state agencies taking part in this exercise!”

“PBS39 is proud to be a part of this school safety exercise,” stated PBS39 General Manager Bruce Haines. “Datacasting is an important public television service that provides real world benefits far beyond the fine programming and educational services for which we are best known. As a tool for first responders, datacasting enhances the safety of the communities we serve and the people who live there.”

For two years DHS S&T and its technical performers Johns Hopkins University Applied Physics Laboratory and SpectraRep, LLC., have been collaborating with APTS on a series of pilot projects demonstrating datacasting’s compelling public safety use cases in various parts of the country. These included flood response and recovery in Houston; multiagency collaboration and interoperability among five federal and state agencies in Boston; search and rescue of missing persons in rural Grant County, Washington; and over-water emergency communications many miles into Lake Michigan from Chicago. In addition, local public television stations have implemented datacasting capabilities to assist with massive crowd control in Washington, D.C., enhance 911 responsiveness in North Carolina, and improve the development of early earthquake warnings in California.

About DHS S&T
The Department of Homeland Security Science and Technology Directorate is the research and development arm of the Department of Homeland Security. It supports DHS components, the nation’s first responders, and the homeland security enterprise by investing in new technology or leveraging existing technology. For more information, visit: https://www.dhs.gov/science-and-technology.

About PBS39
PBS39 is the northeast Indiana region’s only public television station and its sole locally owned-and-operated television station. It broadcasts daily over four channels: PBS39/Channel 39.1; PBS39 Kids/Channel 39.2; CreateTV/Channel 39.3 and 39Explore/Channel 39.4. For more information about PBS39, contact them via phone at (260) 484-8839 or via email at info@wfwa.org.