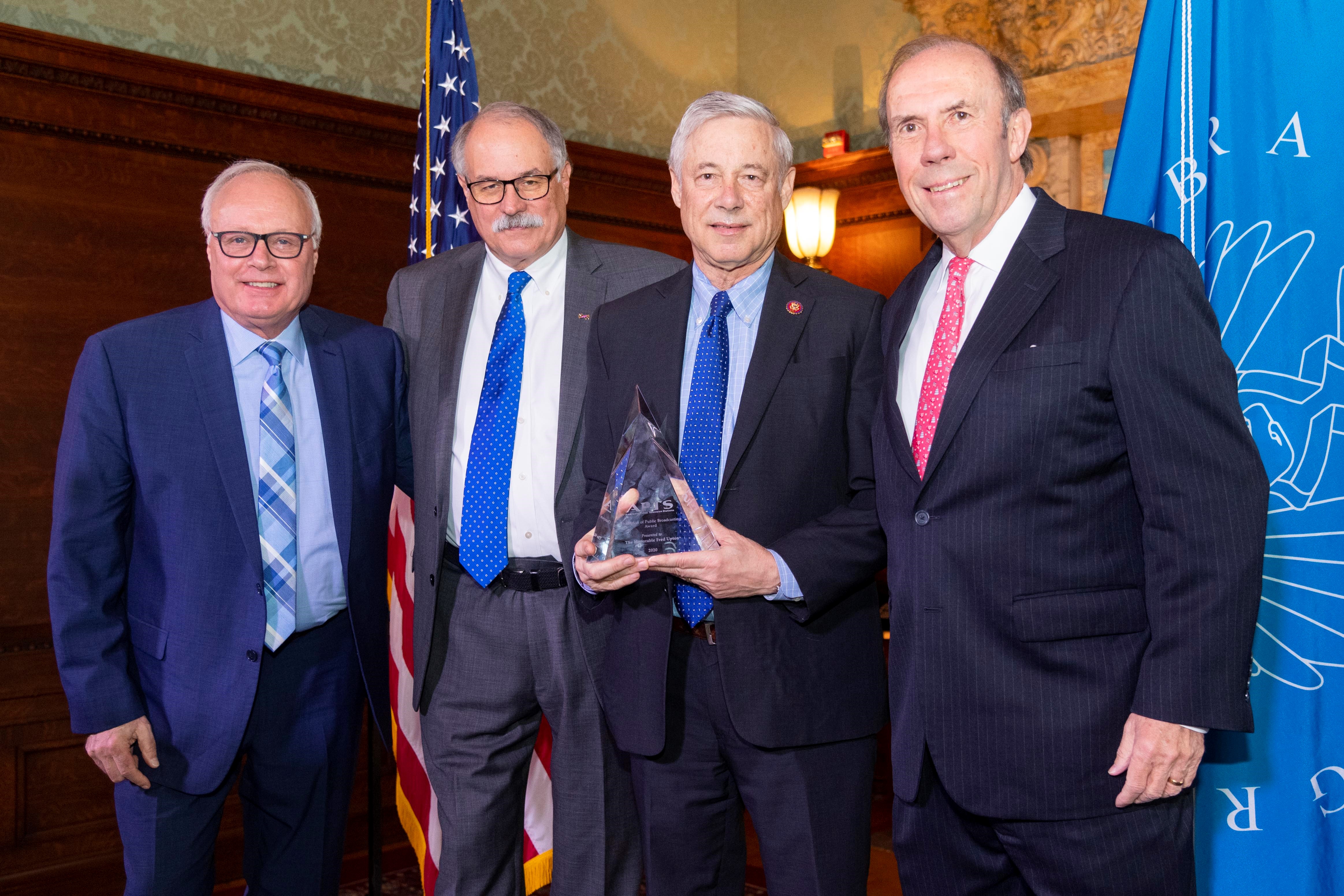 As chairman of the House Energy and Commerce Committee from 2010-2016, Congressman Upton shepherded passage of legislation establishing the broadcast spectrum incentive auction and ensuring that all channel repacking costs were covered.

Congressman Upton is now co-chair of the Public Broadcasting Caucus, which encourages federal investment in public media and works with public broadcasters to enhance their missions of education, public safety and civic leadership in communities across America.

“Fred Upton is a consummate legislator who reaches across the partisan aisle to craft and enact laws that make a difference in America,” said APTS president and CEO Patrick Butler.

“We in public broadcasting are extremely fortunate that a leader of his talent and temperament is one of our champions — and has been for a long time. It’s been my personal privilege to know Congressman Upton since the Reagan Administration, and there simply is no finer public servant.
“He’s helped us build our broad bipartisan support in the Congress, navigate a challenging spectrum auction, and strengthen our ability to serve our country.

"America's Public Television Stations are honored to present this most well-deserved 2020 Champion of Public Broadcasting Award to Congressman Fred Upton."

“It is quite the honor to receive the Champion of Public Broadcasting Award,” said Congressman Upton. “As a former journalism major, I absolutely understand the important role media and public broadcasting plays in our communities across southwest Michigan and around the nation. I remain absolutely committed to supporting public broadcasting and all the work they do to provide valuable services in education and public safety.”

Congressman Fred Upton is proud to represent the common-sense values of Southwest Michigan’s Sixth Congressional District. A diverse section of the state that stretches from the shores of Lake Michigan, the Sixth District is home to key industries that range from agriculture to auto parts manufacturing to high-tech biomedical innovation centers. It includes all of Berrien, Cass, Kalamazoo, St. Joseph and Van Buren counties, and most of Allegan County.

Prior to his election to Congress, Congressman Upton worked for President Ronald Reagan in the Office of Management and Budget (OMB). While at OMB, he learned from President Reagan’s example that it does not matter who gets the credit, as long as the job gets done. That has been Congressman Upton’s approach since he was first elected to Congress in 1986 and continues today.

From 2010 to 2016, Congressman Upton was selected by his House colleagues to serve as Chairman of the Committee on Energy and Commerce. This pivotal committee has jurisdiction over matters concerning energy, healthcare, the environment, telecommunications, commerce, manufacturing and trade, as well as oversight and investigations. Hard work and bipartisan success was a staple during Congressman Upton’s tenure as chairman of the committee. Under Congressman Upton’s leadership, the Committee passed 354 legislative measures through the House and saw 202 of those signed into law by the president. Congressman Upton currently serves as the top Republican leader of the Subcommittee on Energy, which has jurisdiction over national energy policy.

Congressman Upton, and his staff, works hard to ensure that Michigan service members, veterans, and their families receive the benefits they have earned through years of service. From improving health care for our veterans, to improving the disability benefit system or getting veterans back to work, and providing overdue service medals, Congressman Upton has a strong record of supporting our brave veterans and their families. Additionally, Congressman Upton has been working closely with the U.S. Department of Defense to get the Missile Defense Agency Project approved for the Fort Custer Training Center.

Congressman Upton was born on April 23, 1953, and holds a bachelor’s degree in journalism from the University of Michigan. He and his wife, Amey, have two adult children.

The Champion of Public Broadcasting Award was presented to Rep. Fred Upton (R-MI) during the APTS Public Media Summit on Wednesday, February 26, 2020.