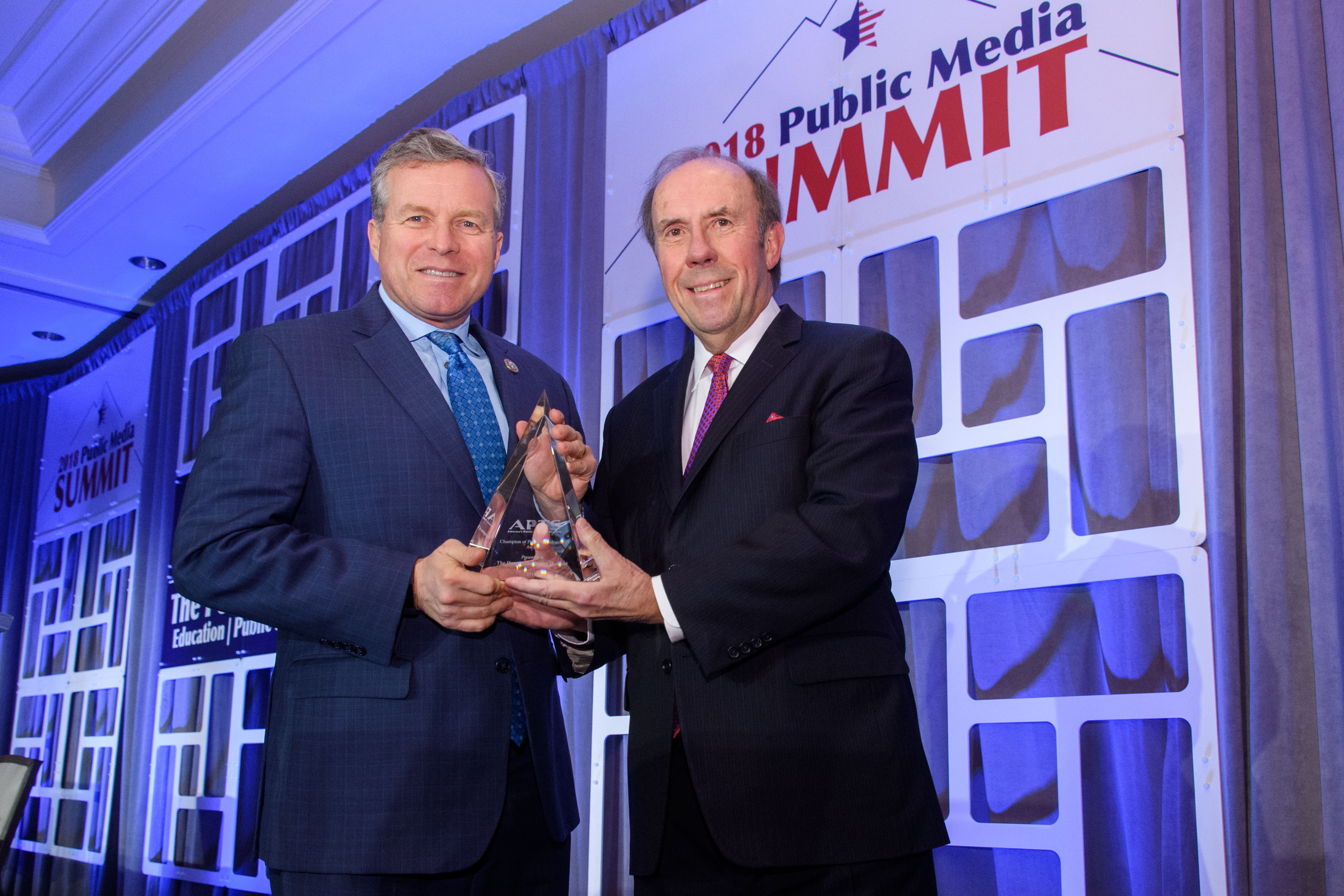 "Congressman Dent is one of the most respected and admired members of Congress," said Patrick Butler, president and CEO of APTS. "He has also been a consistent supporter of America's Public Television Stations, and his leadership has helped us grow our bipartisan support significantly in recent years.

"Congressman Dent is precisely the kind of reasonable, constructive, civil and effective political leader we need more of in Washington. It is my great honor to present this most well-deserved 2018 Champion of Public Broadcasting Award to Congressman Charlie Dent."

"I appreciate the important service the nation's public television stations provide to all Americans. The quality news and entertainment programming they deliver, like the PBS NewsHour, the line-up of Sunday night dramas and programs like Finding Your Roots with Henry Louis Gates, greatly add to our culture. It is an honor to receive this recognition from APTS," said Congressman Dent.

Congressman Charlie Dent has served Pennsylvania's 15th District since 2005. The 15th District is currently comprised of all of Lehigh County and parts of Berks, Dauphin, Lebanon and Northampton counties.

Congressman Dent currently serves as the chairman of the House Appropriations Subcommittee on Military Construction and Veterans Affairs. Congressman Dent was appointed to the Appropriations Committee in 2011. The Committee establishes the funding levels for numerous activities, including, national defense, education, federal law enforcement, homeland security, federal biomedical and health-related research and other government operations. The Military Construction and Veterans Affairs Subcommittee's responsibilities include providing funding to support military base construction, operations, maintenance and troop training. The subcommittee also ensures funding for the Veterans Administration. Congressman Dent also serves on the House Appropriations State & Foreign Operations and the Transportation, Housing and Urban Development subcommittees. During his time as a Member of Congress, Congressman Dent has also served on the House Homeland Security and Transportation committees. He chaired the House Ethics Committee from 2011 to 2016.

Congressman Dent is also a co-chair of the Tuesday Group, a caucus of center-right Republican members focused on fiscal responsibility, a strong national defense and an affirmative obligation to govern.

Prior to serving in Congress, Congressman Dent served eight years in the Pennsylvania House of Representatives representing the 132nd House District from 1991 through 1998. He was then elected to the 16th State Senate District serving six years from 1999 through 2004.

Congressman Dent is a 1978 graduate of William Allen High School. He earned a degree in Foreign Service and International Politics from the Pennsylvania State University in 1982 and a Master's Degree in Public Administration from Lehigh University in 1993. Before entering public service, he worked as a development officer for Lehigh University and as an industrial electronics salesman.

Congressman Dent lives in Allentown with his family: His wife Pamela; and children Kathryn, William and Jack.

The Champion of Public Broadcasting Award was presented to Congressman Charles W. Dent (R-PA) during The APTS Public Media Summit on Monday, February 26, 2018.