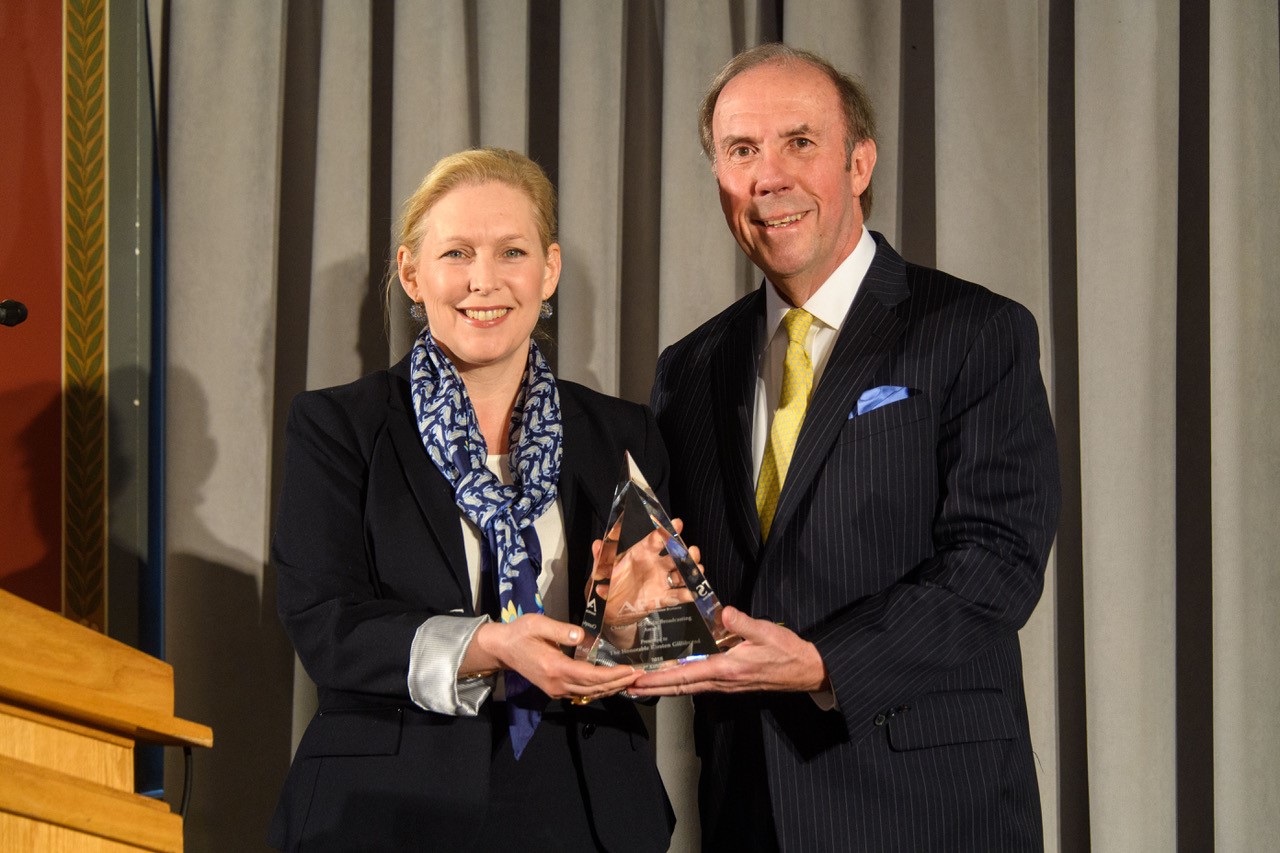 "Seven years ago we got a call from Senator Gillibrand's office saying she was circulating a Senate Dear Colleague letter in support of our funding," said Patrick Butler, president and CEO of APTS. "And each year since, she has tirelessly championed this campaign in the Senate, continuously increasing the number of supporters for our cause. Last year her public media funding letter was signed by a record 45 Senators, including both Democrats and Republicans.

"Senator Gillibrand's steadfast commitment has significantly strengthened our support in the Senate Appropriations Committee and the Senate at large.

"When our funding has been threatened, Senator Gillibrand has been among the first to come to our defense.

"America's Public Television Stations could not ask for a more faithful advocate of our cause, and we are honored to present our 2018 Champion of Public Broadcasting Award to Senator Kirsten Gillibrand of New York."

“PBS helps educate and inspire children and adults alike, no matter where they live or how much money their families have, and I am proud to fight for public broadcasting funding in the Senate,” said Senator Gillibrand. “It’s clear that we need the educational and news programming available on public broadcasting today more than ever before. I encourage everyone who cares about public broadcasting to keep raising their voices and speaking out about why we need it, and why we should never take away its funding.”

One of Senator Kirsten Gillibrand's top priorities in the United States Senate is to rebuild the American economy. She is fighting every day for more good-paying jobs, more products stamped with the words "Made in America," and more new small businesses around New York State. She is determined to make sure that all New Yorkers have the opportunity to reach their potential, and she has consistently been a voice for the voiceless across New York and all around the country.

Throughout her time in the Senate, Senator Gillibrand has been a leader in some of the toughest fights in Washington. She led the effort to repeal the "Don't Ask Don't Tell" policy that banned gays from serving openly in the military; she wrote the STOCK Act, which made it illegal for members of Congress to financially benefit from inside information; and she won the long fight to provide permanent health care and compensation to the 9/11 first responders and community survivors who are sick with diseases caused by the toxins at Ground Zero. Senator Gillibrand brought Democrats and Republicans together to win these legislative victories.

As the mother of two young sons, Senator Gillibrand understands the challenges that working families are facing in today's economy. She is a champion for the economic empowerment of women and working families, and she has authored new legislation to rewrite the rules of the workplace so it can keep up with our changing workforce. She is fighting to pass bills that would raise the minimum wage, make quality child care more affordable, create universal pre-K, and ensure equal pay for equal work. Senator Gillibrand also introduced the FAMILY Act, which would create a national paid leave program for all American workers - for about the cost of a cup of coffee a week.

Senator Gillibrand was the first New York Senator to join the Senate Agriculture Committee in nearly 40 years, and she uses that position to give New York's farmers and agricultural producers a voice in Washington. She has fought for programs that would support specialty crop insurance, expand rural broadband access, and improve recovery efforts after natural disasters. She also continues to lead the fight in the Senate to protect access to healthy meals for struggling children, seniors, and veterans.

After working as an attorney in New York City for more than a decade, Senator Gillibrand served as Special Counsel to United States Secretary of Housing and Urban Development (HUD) Andrew Cuomo during the Clinton Administration. She then worked as an attorney in Upstate New York before becoming a member of Congress.

Born and raised in upstate New York, Senator Gillibrand's home is in Brunswick, New York, with her husband, Jonathan Gillibrand, and their two sons, Theo and Henry.

The Champion of Public Broadcasting Award was presented to Senator Kirsten Gillibrand (D-NY) during The APTS Public Media Summit on Wednesday, February 28, 2018.